Welcome to Grease Traps for Commercial Kitchens! We fabricate bespoke stainless steel grease traps for hotels, restaurants, bars and take-away venues. Our grease traps can be made to your exact specifications in our Belfast based workshop.  We are happy to supply grease traps in Northern Ireland, Southern Ireland and UK wide.

Why do you need Grease Traps in a Commercial Kitchen?

Health and Safety Legislation in Ireland, North and South, gives local authorities the power to prosecute polluters of drains and waterways.  An external passive grease trap will capture Fat, Oils and Grease (FOG) and lessen the need for specialist drain clearance / cleansing and keep your business within the law. 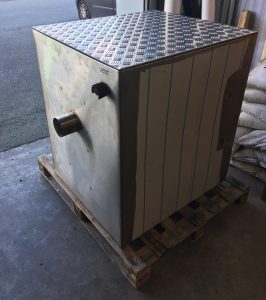 Our Stainless Steel Grease Traps can be made for On Floor, In Ground or Suspended from the Ceiling.  Capacities of 2000 litres can be manufactured to design specification in either cylindrical or cuboid shape as required. The grease trap size can be calculated to suit the individual commercial needs of the facilities and comply with the building regulations 2002 in compliance with BS 1825 2004. 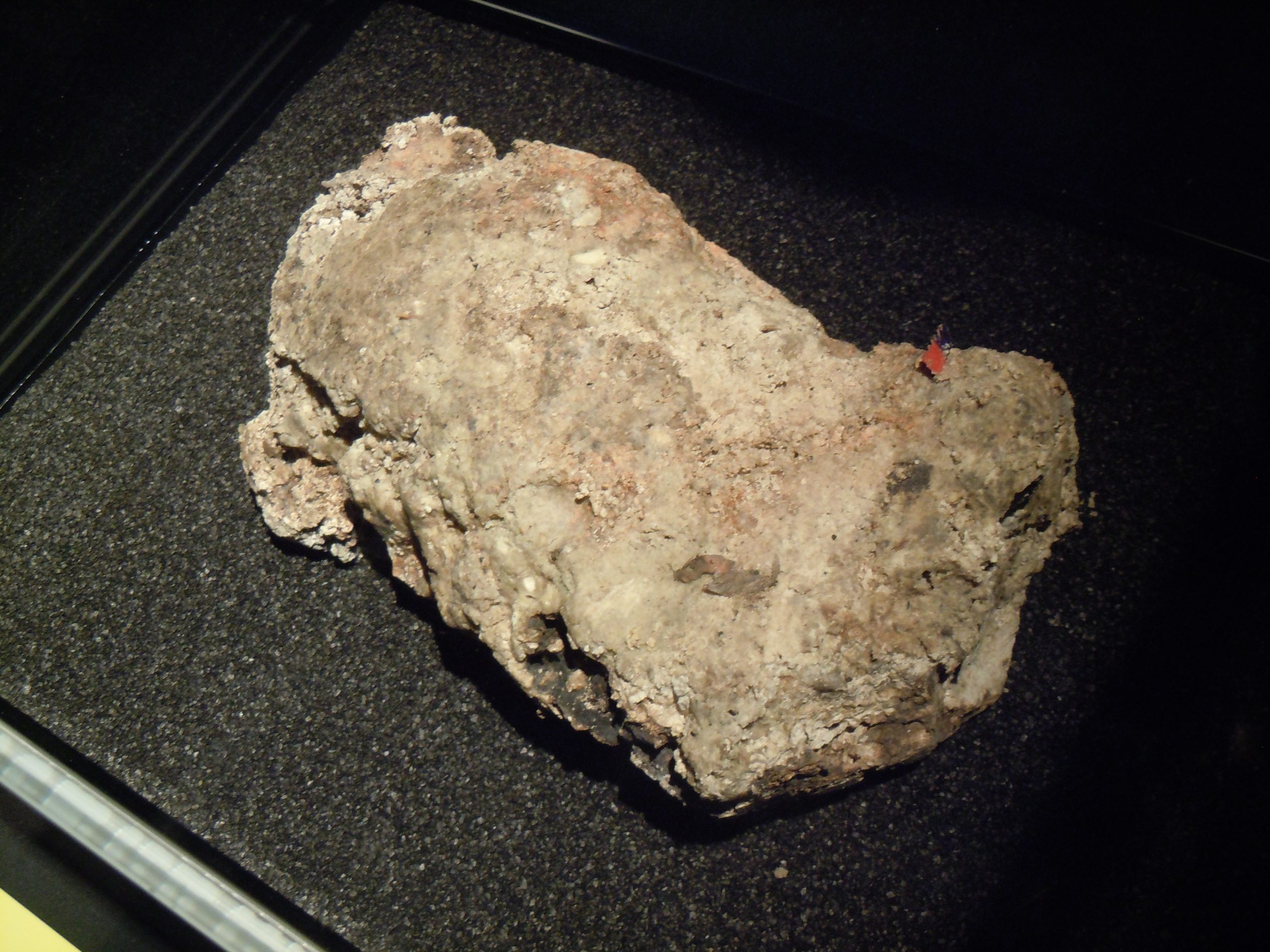 A fatberg is a congealed mass in a sewer system formed by the combination of flushed non-biodegradable solid matter, such as wet wipes, and congealed grease or cooking fat. Fatbergs became a problem in the 2010s in Britain, because of ageing Victorian sewers and the rise in usage of disposable (so-called “flushable”) cloths.

Fatbergs form at the rough surfaces of sewers where the fluid flow becomes turbulent. In pipes and tubes with smooth inner linings, fluid near the containing wall flows only slightly slower than fluid in the central channel of the pipe; thus, the whole volume of fluid flows smoothly and freely. When fluid encounters an obstruction, a resulting swirl of water starts trapping debris.

In some areas, such as London, fat blocked in a sewer can react with the lining of the pipe and undergo saponification, converting the oil into a solid, soap-like substance.

Grease and fat blockages can cause sanitary sewer overflows, in which sewage is discharged into the environment without treatment. In the United States, almost half of all sewer blockages are caused by grease. By using a grease trap, the amount of FOG (fat, oil and grease) reaching the sewer from commercial hot food premises, such as restaurants is greatly reduced.

Fatbergs have been considered as a source of fuel, specifically biogas. Most of the fatberg discovered in Whitechapel in London in 2017, weighing 130 tonnes (130,000 kg) and stretching more than 250 metres (820 ft), was converted into biodiesel.

Curated with thanks from Wikipedia. 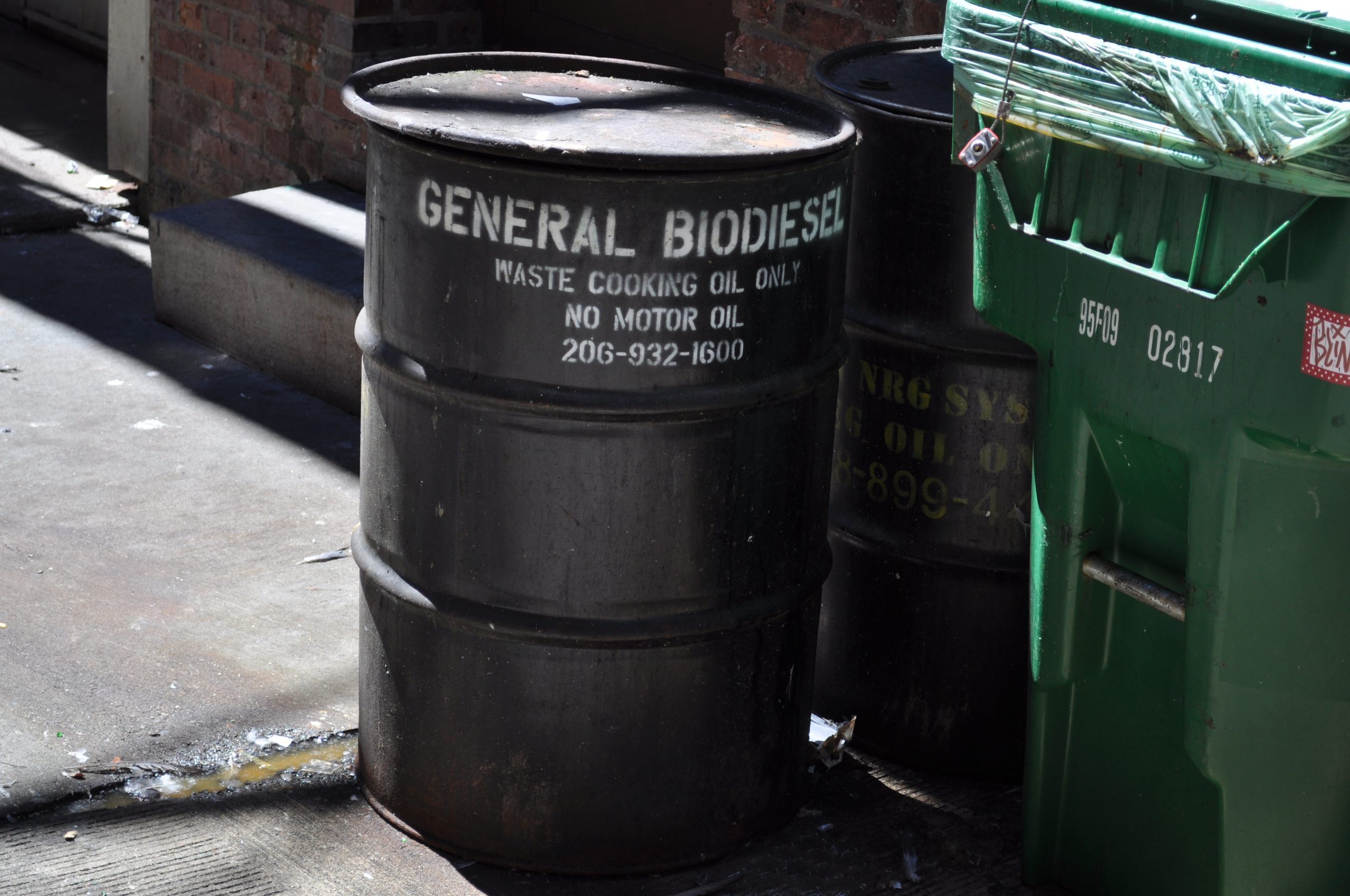 Vegetable oil recycling is increasingly being carried out to produce a vegetable oil fuel.
In the UK, waste cooking oil (yellow grease) collection is governed by the Environment Agency. All waste cooking oil collections need to be carried out by a company registered as a waste carrier by the Environment Agency. On each collection a waste transfer note needs to be filled out and copies held by both parties for a minimum of 3 years.

Used cooking oil can be refined into different types of biofuels used for power generation and heating. A significant benefit is that biofuels derived from recycled cooking oil typically burn clean, have a low carbon content and do not produce carbon monoxide. This helps communities to reduce their carbon footprints. The recycling of cooking oil also provides a form of revenue for restaurants, which are sometimes compensated by cooking oil recyclers for their used deep fryer oil. Cooking oil recycling also results in less used oil being disposed of in drains, which can clog sewage lines due to the build-up of fats and has to be collected there as “brown grease” by grease traps.

Curated with thanks from Wikipedia 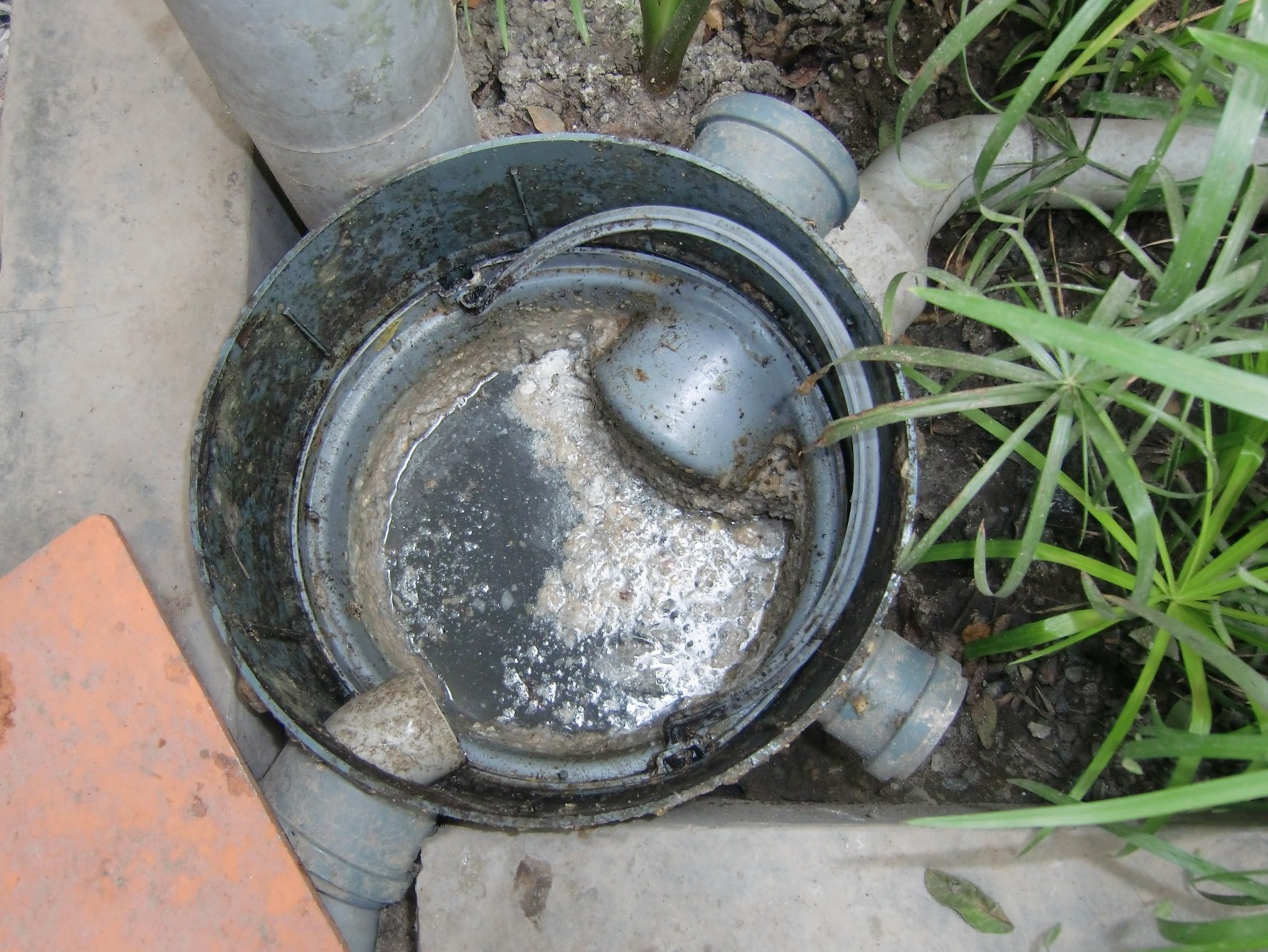 A grease trap (also known as grease interceptor, grease recovery device, grease capsule and grease converter) is a plumbing device (a type of trap) designed to intercept most greases and solids before they enter a wastewater disposal system. Common wastewater contains small amounts of oils which enter into septic tanks and treatment facilities to form a floating scum layer. This scum layer is very slowly digested and broken down by microorganisms in the anaerobic digestion process. Large amounts of oil from food preparation in restaurants can overwhelm a septic tank or treatment facility, causing release of untreated sewage into the environment. High-viscosity fats and cooking grease such as lard solidify when cooled, and can combine with other disposed solids to block drain pipes.

Grease traps have been used since Victorian days: Nathaniel Whiting obtained the first patent in the late 1800’s. The traps reduce the amount of fats, oils and greases (FOGs) that enter sewers. They comprise boxes within the drain run that flows between the sinks in a kitchen and the sewer system. They only have kitchen waste water flowing through them, and do not serve any other drainage system, such as toilets.

The most common passive grease traps are smaller, point-of-use units used under three-compartment sinks or adjacent to dishwashers in kitchens.

Depending on the country, nearly all municipalities require commercial kitchen operations to use some type of interceptor device to collect grease before it enters sewers. Where FOG is a concern in the local wastewater system, communities have established inspection programs to ensure that these grease traps and/or interceptors are being routinely maintained.

Hotel visitors looking to save money on their trips often book a hotel that has an in-room kitchen. Many hotel rooms and suites have full kitchens that include a counter top range and a refrigerator. They feel that preparing their own meals will save them money since they will not need to pay for room service or restaurant food or it makes life for families with small children easier, as they do not need to manage their children in a busy dining room while waiting for food.

This can lead to dishes being washed in a sink that does not lead to a grease trap and possibly lead to fat berg clogs in the external drains, for which the kitchen may be blamed in the wrong.

Grease Traps For Commercial Kitchens Are Worth Their Weight In Gold

Really?
Yes, when you consider what they will save you (provided you clean them regularly)!
1. Fewer clogged drains
2. Fewer nasty smells
3. Lower risk of pest infestation
4. Less chance of disruption to business by the Roads contractors having to dig up the roads to clear a blocked sewer or drain.
5. More pleasant visits from health inspectors when they come to see your kitchen.

Grease traps are not only legally required for commercial food preparation areas in many states and countries but are helpful to the commercial kitchen
manager or owner. Grease traps remove the FOG items (Fat, Oil and Grease) from the grey water after it leaves the dish washing appliances and before it reaches
the external drain.

Yes. There are plenty of videos online that will show you grease traps being installed, tested and cleaned. If you are going to watch a video of a grease trap
that has been in use, beware, the inlet side is not a pretty site. Having said that, the difference between the water coming into the grease trap and that leaving the grease trap after cleaning is striking. And of course, there is always the waste oil to be pumped out and recycled.

There are two types of grease trap: above or below ground. This video shows an above ground grease trap being cleaned. Warning, the inlet side (as with all used grease traps) looks pretty gunky! But compare that with the outlet side – total difference.

What Is A Grease Trap?

A grease trap is a appliance that is used to collect and remove solid material and especially fat, oil and grease (FOG’s) that could enter the sewers from your kitchen. They should only have wastewater from kitchens flowing through them. No other wastewater from other drainage system sources, such as toilets, should be allowed. Removing FOGs, can reduce the number of drain blockages you might suffer and also prevent huge fatbergs in the main sewer system, bad smells, disruption in the street and possibly pest infestations. You can find out more about them here. If you prefer to watch a video, then check out this one:

There are two types of grease trap: above or below ground.

How Does A Grease Trap Work?

When the waste water from your kitchen enters the trap, it flows first through a sediment basket which removes larger solid particles. The grease in the water is less dense (“lighter”) than water and doesn’t mix with it, so it floats to the top (see this diagram).

Grease traps have to be cleaned regularly to remove these FOGS, otherwise, they build-up, and can eventually overflow through the outlet and even back-up through the inlet. Special cleaning materials can be used to reduce or prevent FOG build-up in internal piping. You should check whether these are allowed in your area, before using them. Not all water authorities allow their use.

A large amount of fat, oil and grease (FOG) is produced by commercial kitchens and food establishments in the UK every day. If left untreated or not removed before joining the main sewage system, it can cause major issues with main sewers and a huge amount of disruption to businesses as it is cleared. In the UK, it is a legal requirement to install a suitable grease treatment system for effective FOG removal from wastewater from commercial hot food premises. 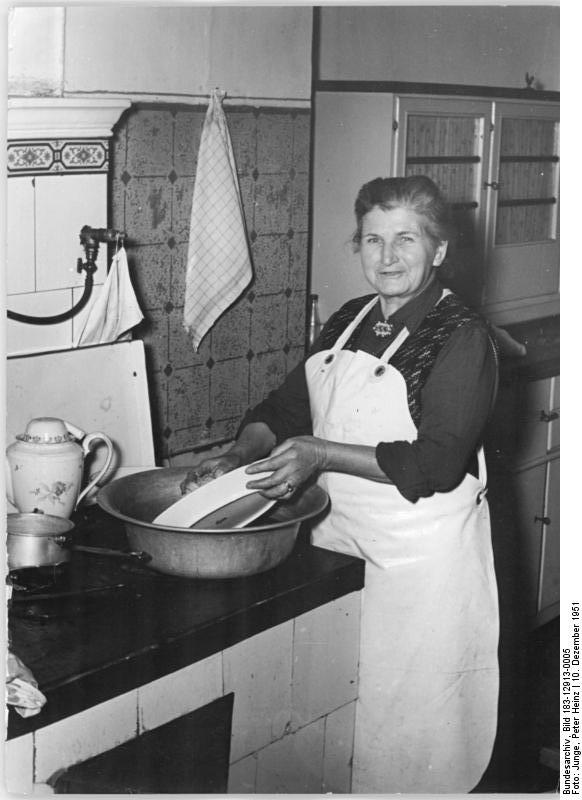